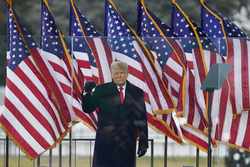 Alittle after 2 p.m. Eastern time on Wednesday, protesters crashed into the U.S. Capitol and forced a halt in the certification of the electoral vote. As the Senate reconvened that night, Senate Majority Leader Mitch McConnell (R-Ky.), speaking as though he had just survived 9/11, condemned the "thugs" waving flags who had forced them to run away for a few hours. Man of the People Mitt Romney, who probably will not repeat his mistake of flying commercial, called the Capitol storm "an insurrection, incited by the president of the United States."