An Alabama man allegedly parked a pickup truck packed with 11 homemade bombs, an assault rifle and a handgun two blocks from the US Capitol building on Wednesday for hours before authorities ever noticed, according to federal prosecutors. 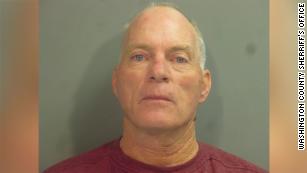 Richard Barnett
"The FBI is not sparing any resources in this investigation," he said, noting that agents from all 56 field offices are involved in the investigation combing through videos, social media posts and tips from the public.
"Today's charges are just the start of the results of the extensive work done by the FBI and our partners for the past few days, and we are far from done," D'Antuono added.
That message was echoed by Ken Kohl, the second highest-ranking official in the US attorney's office for DC, who said Friday, "We literally have hundreds of prosecutors and agents working from three command centers on what is really a 24/7 operation."
He added, "The department will spare no resources in our efforts to hold all these people accountable. It's going to be something that we'll continue to work on in the coming hours, days, and weeks as we pursue this investigation."
Among those facing federal charges is Richard Barnett of Arkansas, who was photographed sitting at House Speaker Nancy Pelosi's desk during Wednesday's riots. Federal authorities say he was taken into custody Friday morning in Little Rock.
Barnett, who is known as Bigo, was charged with knowingly entering or remaining in restricted building or grounds without lawful authority, violent entry and disorderly conduct on Capitol grounds as well as the theft of public property, according to a criminal complaint.
TRUMP WHITE HOUSE
It was not immediately clear whether Barnett has an attorney.
Barnett is in FBI custody, the Benton County, Arkansas, sheriff's office public information officer Lt. Shannon Jenkins confirmed to CNN. "He is in the custody of the FBI. He did not get booked into our facility. He was transported to another facility and in the custody of the FBI," she said in an email.
When asked, Jenkins did not provide the name of the facility that Barnett was transferred to.
Authorities say Barnett was caught on video surveillance entering Pelosi's office area around 2:50 p.m. ET with an American flag and cellphone, and leaving six minutes later with only his cellphone.
Barnett was photographed with his boot propped on Pelosi's desk and the flag draped nearby.
He later spoke with media outlets and was captured on video holding an envelope from Pelosi's office. Barnett told the reporter, "I did not steal it." He said he bled on the envelope and "put a quarter on her desk," according to court filings signed by a special agent with the Capitol Police Department.
Even as more arrests are made in connection with the breach of the Capitol, lawmakers say they are perplexed at the lack of preparedness among law enforcement given that it had been known for weeks that Trump was promoting a rally he said was aimed at preventing the certification of Joe Biden's win.
In response, US Capitol Police Chief Steven Sund is resigning. He said in a statement Thursday that Capitol Police and other law enforcement officers were "actively attacked" with metal pipes and other weapons.
"They were determined to enter into the Capitol Building by causing great damage," Sund said.
"The violent attack on the U.S. Capitol was unlike any I have ever experienced in my 30 years in law enforcement here in Washington, D.C.," he added. "Maintaining public safety in an open environment -- specifically for First Amendment activities -- has long been a challenge."
Beyond just arrests, multiple rioters who were at the Capitol are being identified through images and video on social media, and some have lost or left their jobs because of it.
Direct marketing company Navistar, for example, announced that an employee had been terminated after he was photographed wearing his company ID badge inside the breached Capitol.
"While we support all employees' right to peaceful, lawful exercise of free speech, any employee demonstrating dangerous conduct that endangers the health and safety of others will no longer have an employment opportunity with Navistar Direct Marketing," the company said in a statement provided to CNN.
POST YOUR OPINION
CNN.COM
https://www.cnn.com/2021/01/08/politics/us-capitol-riots-arrest-pelosi-desk/index.html?utm_source=feedburner&utm_medium=feed&utm_campaign=Feed%3A+rss%2Fcnn_allpolitics+%28RSS%3A+CNN+-+Politics%29