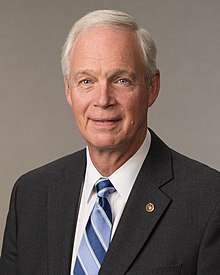 The Wisconsin Republican’s one-week ban from uploading videos stems from his comments to the Milwaukee Press Club event, which were posted on the platform.

Sen. Ron Johnson was suspended Friday from uploading videos to YouTube for one week, after the company said he violated its COVID-19 “medical misinformation policies.”

The Wisconsin Republican’s removal stems from statements he made during a June 3 Milwaukee Press Club event, which were posted to YouTube. He criticized the Trump and Biden administrations for “not only ignoring but working against robust research (on) the use of cheap, generic drugs to be repurposed for early treatment of COVID,” the Milwaukee Journal Sentinel reported.

A YouTube spokesperson said: “We removed the video in accordance with our COVID-19 medical misinformation policies, which don’t allow content that encourages people to use Hydroxychloroquine or Ivermectin to treat or prevent the virus.”

“YouTube’s ongoing COVID censorship proves they have accumulated too much unaccountable power,” he said in a statement. “Big Tech and mainstream media believe they are smarter than medical doctors who have devoted their lives to science and use their skills to save lives. They have decided there is only one medical viewpoint allowed and it is the viewpoint dictated by government agencies.”

Video of Johnson’s full speech was still on the Milwaukee Press Club’s YouTube channel as of Friday afternoon.

Corri Hess, Milwaukee Press Club President tweeted: “This on the record event with journalists will remain on the Press Club’s YouTube site.