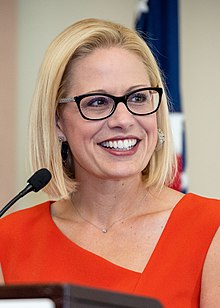 The Arizona Democrat argued in an op-ed that preserving the Senate minority rights is more important than passing legislation amid threats to democracy.

Sen. Kyrsten Sinema stood firmly for the filibuster Monday, saying essentially that Democrats should not take advantage of being in the majority by passing legislation that a future Republican majority could overturn.

The Arizona Democrat wrote an opinion article that was published Monday in The Washington Post, the night before senators are set to vote on whether to debate sweeping voting rights legislation. No Republicans in the evenly divided Senate are expected to support the For the People Act, which would need at least 60 votes to overcome a filibuster. GOP lawmakers have already successfully used the filibuster this year to stop debate over one piece of legislation: establishing a bipartisan Jan. 6 commission.

“It’s no secret that I oppose eliminating the Senate’s 60-vote threshold. I held the same view during three terms in the U.S. House, and said the same after I was elected to the Senate in 2018,” the moderate Democrat wrote. “If anyone expected me to reverse my position because my party now controls the Senate, they should know that my approach to legislating in Congress is the same whether in the minority or majority.”

In her editorial, Sinema’s foundational argument is that the gridlocked status quo in the Senate and the need to preserve the power of the minority are preferable to an environment in which both parties can legislate when they’re in the majority and have the results of that work influence future elections.

“To those people who want to eliminate the legislative filibuster to pass the For the People Act (voting-rights legislation I support and have co-sponsored), I would ask: Would it be good for our country if we did, only to see that legislation rescinded a few years from now and replaced by a nationwide voter-ID law or restrictions on voting by mail in federal elections, over the objections of the minority?” Sinema wrote.

“To those who want to eliminate the legislative filibuster to expand health-care access or retirement benefits: Would it be good for our country if we did, only to later see that legislation replaced by legislation dividing Medicaid into block grants, slashing earned Social Security and Medicare benefits, or defunding women’s reproductive health services?”

Though intended to argue that Democrats will regret abolishing the filibuster in the future when it’s time to fight for legislation as the minority, the op-ed essentially made the case against passing any bill that could be later rescinded by the opposing party. This includes the For the People Act, a voting rights bill that would, among other things, hold states accountable for making sure Americans have access to the ballot box.

Despite the dhttps://www.theopinionpoll.comream of bipartisanship by Sinema and other moderate Democrats, such as Sen. Joe Manchin (W.Va.), Republicans are busy blocking every bill introduced by Democrats and, at the state level, passing voter suppression laws across the country, including in Sinema’s Arizona. None of the voter suppression bills proceeded with a supermajority requirement, and none of the bills had bipartisan support. In fact, the bills and laws are an attempt to give Republicans more power and to move further away from bipartisanship ― something the Democratic majorities in the federal government are mostly working to fix.

The idea of abolishing and reforming the filibuster has become increasingly popular among Democrats, who have the majority in the House and, as of the 2020 election, a very narrow majority in the Senate. Senate Majority Leader Chuck Schumer (D-N.Y.) has voiced his support for getting rid of the filibuster so that Democrats can pass a backlog of legislation without getting blocked by Republicans.

“We Democrats wish a voting rights bill would be bipartisan. By all rights it should be. But the actions in state legislatures were totally partisan. None of these voter suppression laws were passed with bipartisan support. Not one. And Washington Republicans seem dead-set against all remedies, whether it’s S.1, some modified version, or the John Lewis Voting Rights Act, which Sen. [Mitch] McConnell has recently opposed,” Schumer said Thursday on the Senate floor.

“So the idea that we can have some kind of bipartisan solution to this partisan attack on democracy befuddles me.”

Schumer’s office did not immediately respond to HuffPost’s request for comment.

On June 4, former Arizona Attorney General Grant Woods ― who prominently backed Sinema’s election to the Senate ― said that she must help abolish the filibuster or get out of office. On June 10, three dozen Arizona Democrats begged Sinema to do everything in her power to pass the For the People Act, as Republicans in her own state attempt to audit the 2020 election results that went to President Joe Biden. In a letter, the Democrats said that “democracy is too important to be sacrificed at the altar of archaic and anti-democratic Senate procedures such as the filibuster.”

On Monday afternoon, Biden hosted Manchin and Sinema at separate meetings to discuss a series of issues stuck in Congress, including voting rights and infrastructure funding, according to a White House official. The president “made it clear how important he thinks it is that the Senate find a path forward” on voting rights legislation.