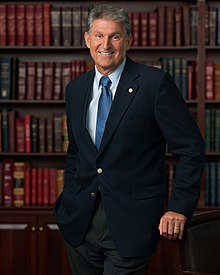 “If he doesn’t have the courage to do the right thing ... let him vote no in front of the whole world,” said Sen. Bernie Sanders (I-Vt.).

Sen. Joe Manchin (D-W.Va.) was branded a coward and supporter of monied interests by Democrats on Sunday after declaring that he will not support President Joe Biden’s Build Back Better plan, a decision that likely dooms the bill’s passage in the Senate, which is split on party lines.

“He has continued to move the goalposts, he has never negotiated in good faith,” Rep. Ayanna Pressley (D-Mass.) said of Manchin in an interview on CNN’s “State of the Union.”

White House press secretary Jen Psaki also appeared to question Manchin’s integrity, saying his decision, which he announced on “Fox News Sunday,” is “at odds with his discussions this week with the President, with White House staff, and with his own public utterances.”

“Senator Manchin promised to continue conversations in the days ahead, and to work with us to reach that common ground. If his comments on FOX and written statement indicate an end to that effort, they represent a sudden and inexplicable reversal in his position, and a breach of his commitments,” she said. 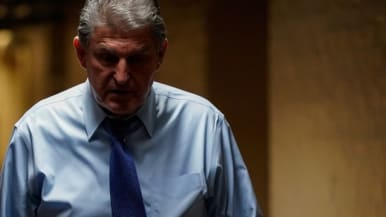 Rep. Pramila Jayapal (D-Wash.), the chair of the Congressional Progressive Caucus, similarly accused Manchin of betraying his promise to work with Biden on the environmental, medical and social issues addressed in the bill.

“He routinely touts that he is a man of his word, but he can no longer say that. West Virginians, and the country, see clearly who he is,” she said in a statement.

Manchin declared Sunday that he has “tried everything humanly possible” and cannot support the plan, citing its $1.75 trillion price tag and concerns about the nation transitioning too quickly to clean energy.

Manchin, whose family has a lucrative coal business in his home state, said he doesn’t believe the plan — which would fight climate change, expand Medicare benefits, and lower the cost of prescription drugs and childcare — would be good for West Virginia and said he “can’t vote for it.”

Sen. Bernie Sanders (I-Vt.), head of the Senate Budget Committee, similarly fired back at Manchin’s apparent resolve, arguing that the plan would in fact do a world of good for West Virginia, considering the economic hardships its residents are facing.

“West Virginia is one of the poorest states in this country. You’ve got elderly people, you’ve got disabled people, who would like to stay home but are forced into nursing homes. He’s going to have to tell the people of West Virginia why he doesn’t want to expand medicare to cover dental, hearing and eyeglasses,” said Sanders, who expressed disappointment in Democrats’ apparent failure to unite in support of working families and against corporate interests.

“I would have hoped that we could have had at least 50 Democrats on board who had the guts to stand up for working families and take on the lobbyists and the powerful special interests,” he said. “Corporate profits are an all-time high. And what some of us are saying, maybe, maybe we will stand up for working families for a change. But, apparently, we don’t have the 50 votes that we need.”

Sanders said he still plans to bring the bill up for a floor vote, which he said would put Manchin in the spotlight while voting against it.

“If he doesn’t have the courage to do the right thing for the working families of West Virginia and America, let him vote no in front of the whole world,” Sanders said.