When rioters stormed the U.S. Capitol on Jan. 6, the attack was well-documented. Many of the insurrectionists livestreamed it or posted photos on social media. The Capitol itself was full of journalists, who reported what happened. And numerous charging documents in the weeks since the insurrection have exposed even more.

Still, there were several key revelations during the initial days of former President Donald Trump’s second impeachment trial. The House impeachment managers, led by Rep. Jamie Raskin (D-Md.), introduced evidence previously unseen by the public, but the most damning detail may have been inadvertently revealed by one of Trump’s closest allies in the Senate.

Here’s what we’ve learned so far:

Rioters Came Within 100 Feet Of Pence

“They were within 100 feet of where the vice president was sheltering with his family,” Plaskett told senators. “And they were just a feet [sic] away from one of the doors to [the Senate] chamber, where many of you remained at that time.”

The video showed U.S. Capitol Police Officer Eugene Goodman leading a group of rioters away from an entrance to the Senate chamber around 2:15 p.m. ET as Pence and his family sought shelter in a room nearby. Pence wasn’t evacuated to a secure location until 2:26 p.m., Plaskett said.

In the impeachment managers’ model below, the orange dot represents Pence, the blue represents Goodman, and the red represents the rioters.

Newly elected Sen. Tommy Tuberville (R-Ala.), one of Trump’s closest allies in the Senate, appeared to inadvertently confirm on Wednesday that Trump knew Pence was in danger at the Capitol when he denounced his vice president on Twitter.

As the second day of trial wrapped, Tuberville told reporters that Trump had called for his help in delaying the electoral vote certification even as the riot raged. The senator said he explained to the then-president that he didn’t have time to talk at the moment.

“He didn’t get a chance to say a whole lot because I said, ‘Mr. President, they just took the vice president out. I’ve got to go,’” Tuberville said.

Pence’s security detail removed him from the Senate chamber at 2:14 p.m. As Plaskett noted, he and his family hid in a nearby room until 2:26 p.m. when he was evacuated to a secure location.

This means Trump knew Pence’s safety was at risk when he tweeted at 2:24 p.m.: “Mike Pence didn’t have the courage to do what should have been done to protect our Country and our Constitution. … USA demands the truth!”

Meanwhile, insurrectionists at the Capitol were chanting “Hang Mike Pence!” and calling him a “traitor” for refusing to try to overturn the election results as Trump had pressured him to do.

Romney, Schumer Ran From The Mob

The security video introduced by the impeachment managers included harrowing, never-before-seen images of congressional members and staffers fleeing the mob.

Sen. Chuck Schumer (D-N.Y.), then-incoming Senate majority leader, can be seen walking down a hallway with some of his aides before quickly turning around and running in the opposite direction to escape the rioters.

In another shot, Officer Goodman directs Sen. Mitt Romney (R-Utah), one of Trump’s most prominent Republican critics, away from the violence. Romney can then be seen running after Goodman.

The impeachment managers on Tuesday released police dispatch recordings that captured law enforcement’s desperate pleas for backup as they worked to protect the Capitol despite being massively outnumbered by the rioters.

“They’re starting to dismantle the reviewing stand,” an officer says. “They’re throwing metal poles at us.”

Five people died that day, including one police officer. Two other officers who responded toHuffPost - Breaking News, U.S. and World News | HuffPost the riot died by suicide in the days that followed.

Roughly 140 officers were wounded in the attack, the Capitol Police officers’ union said last month. Their injuries included head wounds, cracked ribs and smashed spinal discs. One officer had a heart attack. Another was gouged in the eye with a flagpole.com

A statement from Sen. Tommy Tuberville shows Trump turned his mob against Pence minutes after hearing his vice president had to be hustled from the Senate. 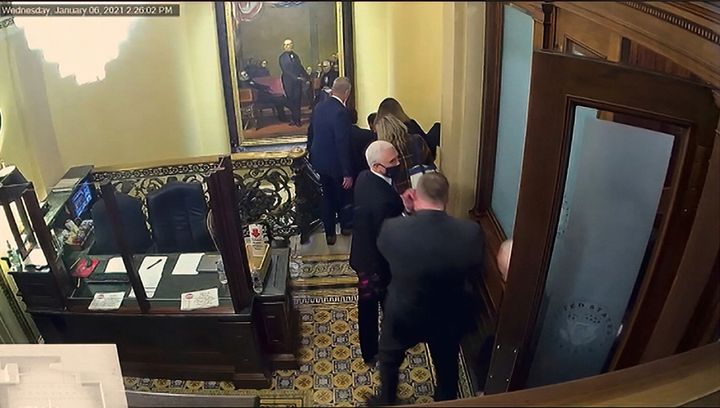 Donald Trump posted a tweet attacking his own vice president for lacking “the courage” to overturn the election for him ― enraging his Jan. 6 mob even further ― just minutes after learning that Mike Pence had been removed from the Senate chamber for his own safety.

Newly elected Sen. Tommy Tuberville (R-Ala.) told reporters Wednesday night, following the second day of the former president’s impeachment trial, that Trump had called for his help in delaying election certification the afternoon of the U.S. Capitol attack but he had told Trump that Pence had just been taken from the Senate and he couldn’t talk just then.

“He didn’t get a chance to say a whole lot because I said, ‘Mr. President, they just took the vice president out. I’ve got to go,’” Tuberville said.

According to video footage from that day, Pence was removed from the Senate at 2:14 p.m. after rioters had broken into the Capitol, meaning that when Trump lashed out at Pence at 2:24 p.m., he already knew Pence’s life was in danger.

“Mike Pence didn’t have the courage to do what should have been done to protect our Country and our Constitution,” Trump wrote in his tweet.

Videos shown by Democratic House members presenting their impeachment case document that rioters were aware of Trump’s tweet. Some had erected a gallows outside the Capitol. Others roamed the halls, chanting, “Hang Mike Pence.”

The exact time Pence was taken from the Senate following the breach of the Capitol by the mob Trump had incited to try to overturn the presidential election was known the day of the attack, as was the time of Trump’s tweet. What was not known until Tuberville’s statement was whether Trump was aware of the danger Pence was in at the time he posted his tweet.

Miller and other Trump boosters have been arguing that the former president did not incite the mob that attacked the Capitol and that he could not have known that they would resort to violence.

Democrats presenting the impeachment case spent hours Wednesday showing that Trump began claiming he could only lose reelection if the other side cheated many months before Nov. 3 and that he began ramping up his language encouraging supporters “to fight” starting just days after losing by 7 million votes.

All but six Republican senators voted Tuesday to dismiss the impeachment case as “unconstitutional” because Trump is no longer in office. Should Trump be convicted with a two-thirds supermajority, a simple majority vote would prevent him from ever seeking federal office again.

“I’m pretty worked up about it given what’s at stake for the Constitution and the country,” Fox News’ Ingraham said of Bruce Castor’s defense of the former president.

Fox News’ Sean Hannity and Laura Ingraham were less than impressed with how Donald Trump’s attorney defended the former president in the opening day of his Senate impeachment trial on Tuesday.

The prime time personalities, who routinely use their shows to advocate for Trump, on Tuesday night joined Republicans, pundits and others in slamming lawyer Bruce Castor’s confusing and widely mocked defense of the former president from the charge of inciting the deadly U.S. Capitol riot on Jan. 6.

Ingraham, in the hand over from Hannity’s show, thanked her colleague for pressing other Trump attorney David Schoen on Castor’s presentation.

“You’re way too charitable,” Ingraham told Hannity. “If you hired that guy in a case that you were paying the bills on. It would have been like, ‘I’m sure you’re a nice person, but enough praise toward the Democrats.’”

“The whole thing was like a walk down memory lane about how much he loves the Senate,” Ingraham responded. “This is like storytime at the trial. It was ridiculous.”

“I’m pretty worked up about it given what’s at stake for the Constitution and the country,” Ingraham added.